Deprecated: The each() function is deprecated. This message will be suppressed on further calls in /var/www/wp-content/plugins/js_composer/include/classes/core/class-vc-mapper.php on line 111
 History of the Blue Crew – Friends of Hamilton Rowing Skip to the content

Crew has a long tradition at Hamilton College, beginning in the mid 1800’s, just after the Civil War. At this time, the team practiced on the Chenango Canal, which stretched from Utica to Binghamton. Located at the bottom of College Hill, the canal provided a perfect setting for a popular sport at Hamilton. A point worthy of note is that Hamilton competed at the legendary 4th of July races on Saratoga Lake in 1875 & 1876. As told in Harper’s magazine these were the largest regattas ever assembled to that point in the United States. The 1876 race sprint style race consisted of 16 Colleges (simultaneous start, 16 lanes across) racing in “sixes” along a three mile course. At this regatta, Hamilton rowed against perennial powerhouses Harvard, Princeton and Yale, as well as their traditional small college rivals Union, Williams, Trinity, and Wesleyan. After the completion of the New York State Thruway in 1910, the canal was filled in, bringing the first chapter of Hamilton Crew to an end.

Under the leadership of a small group of dedicated and ambitious students, Hamilton Crew experienced a rebirth in 1983. Lacking equipment, coaches, and funding, the entirely student-run team was driven completely by spirit. At this time the club of over forty students traveled over a half an hour every day to Delta Lake located in Rome, New York. There the team operated out of Delta Lake State Park storing their wooden shells on the ground. 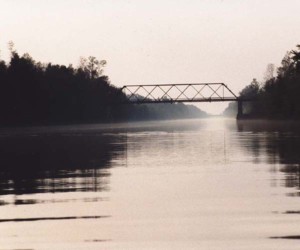 In 1987, the team moved locations to an old airport in Marcy, NY that sat on the banks of the Erie Barge Canal. An ideal body of water stretching from Albany to Buffalo, the canal provided the team with flat water and unlimited mileage. While the rowing conditions were ideal, the team’s equipment still remained outdated. Hamilton continued to row in its two wooden shells, a four and an eight, often borrowing boats from other teams in order to compete. The highlight of Hamilton Crew’s early years was a world record setting long distance row that began in Utica at 5:30 in the morning and ended in Albany. The team of 10 and a safety launch rowed 148 miles, shattering the old record of 130 miles, and raising 14,000 dollars in the process. This row enabled the team to purchase a used boat from Northeastern. Interestingly enough, the boat until recently remained in use and bore one of the founders’ names.

In 1990, the team moved to its present site at a NY state boat launch along the Erie Barge Canal in Rome, NY. With the generosity of parents and alumni, the team was able to purchase a trailer as well as a used boat from Yale. Known as the “Blew (and later Blue) By You”, the boat built quite a reputation (both good and bad) in the rowing community. However, the team still struggled in competition against other programs, which, during the late 1980s and early 1990s, were vastly improving as their funding was increased. Professional coaches were hired by these teams and, in most cases, varsity status was awarded by their colleges.
The fall of 1993 marked a turning point for the program, where both coaches and rowers stepped up the intensity of their efforts. This new spirit in the fall of 1994 coincided with the first ever college sanctioned fundraising effort. The newly organized Friends of Hamilton Crew contributed both capital and hard work to help the team realize a long time dream of having their own boathouse. The boathouse, with room for ten eights, was dedicated in April of 1995 to the student coaches whose energy and commitment made it possible. With the construction of the boathouse and the continued support of the Friends, the team was able to significantly improve its equipment both in quality and number. With these improvements came increased participation and the team grew from 45 to 75 rowers from 1994-96. 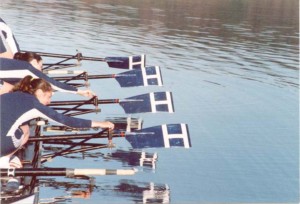 As one might expect, with increased support, participation, newly acquired equipment and the unquenchable “Blue Crew” spirit came improved results. Beginning in the fall of 1995 Hamilton Crew became more recognizable at regattas for their efforts on the water, not just the spirit they displayed on shore. However, the team was still not satisfied. In order to really improve, it needed to set its sights on varsity status and a professional coach. Upon the graduation of the last student coach in 1996, the team was able to convince the College to enter into a partnership with Friends of Hamilton Crew to provide a salary for a part-time coach.

In the Fall of 1998 another dream was realized and the Hamilton Crew program began a new chapter in its history. The program was elevated to the status of varsity sport and hired its first full-time and assistant coaches. The program did well under the leadership of Joe Bilyea, an accomplished rower and a coach with a great deal of experience. Under Coach Bilyea, the team began its transformation of attitude from club to varsity and was rewarded with small victories during his time at Hamilton. In the Fall of 2001, the arrival of Mike Gilbert, a coach with a winning record behind him and a competitive spirit, further intensified the drive of the team. Now, after two years of rebuilding, this relatively young team, with the support of the Friends and its coaching staff, looks forward to proving its skill and producing record-breaking results in the 2003-2004 season.